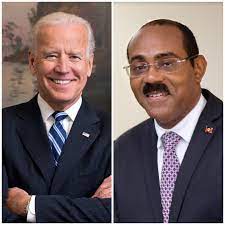 ​Antigua and Barbuda’s Prime Minister Gaston Browne is calling for peace between China and the United States, telling Joe Biden that he should not provoke the Republic of China.

His comment comes on the heels of tensions between the two superpowers over Nancy Pelosi’s visit to Taiwan hours after China announced sanctions against the US House speaker.

China’s Foreign Ministry said that it was introducing new countermeasures against Washington including the suspension of climate talks; a direct reaction to Pelosi’s visit to Taiwan.

Some of these measures also cancellation of future phone calls and meetings between Chinese and US defense leaders.

Browne said these provocations can only lead to a downturn in the global economy and can even trigger military action.

“As an independent nation that is a friend of all, we want to emphasize the need for the US and China to work together in the interest of all humanity. They are the two largest economies in the world and there is no need for unnecessary provocations,” Browne said.

China also suspended anti-drug cooperation with the US, legal assistance on criminal matters cooperation on the repatriation of illegal immigrants, and the combat of transnational crimes.

“There are so many areas of instability globally. We want global peace and solidarity among nations, not for nations to think they have the right to provoke because they have superpowers. This can lead to inadvertent military actions and that is the last thing that we need,” Browne said.

“Let me make it clear that we are not seeking to take sides here. The US is also important to the government and people of Antigua and Barbuda. Most of our tourism and foreign exchange we earn from the US and most of what we consume we are from the US. Our role is not to condemn the US or China but to call for peace and for the US to bring an end to these provocations,” Browne added.

Browne is also responding to statements by China’s Foreign Ministry that it would suspend climate change talks, while Beijing announced that it would sanction Pelosi and her immediate family over the visit to Taiwan.

In fact, in its condemnation, China said Pelosi’s, trip to Taiwan amounted to “seriously interfering in China’s internal affairs

“We do agree that people have a right to travel wherever they wish but if certain actions will provoke and worsen the Chinese-Taiwan relationship, then I don’t know now is the time to be encouraging that type of provocation,” he said.

Browne said another conflict, along with the way in Ukraine would mean an erosion of living standards of small island states

He also added a human touch, saying to the US president: “I want to call on President Biden in particular. You are an old man and you ought to be a man who should preside over global peace and solidarity. Old men don’t make war…old men ensure there is peace,”.