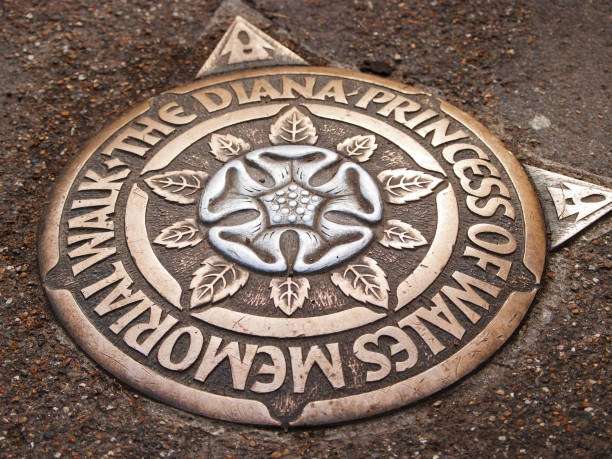 On Wednesday August 31 it will mark 25 years since the tragic death of one of the most famous people of the 20th Century. In 1997 Princess Diana was just 36 years old when she died in a terrible car crash in a Paris underpass, travelling in the back seat of a vehicle alongside her boyfriend of the time, Dodi Fayed, son of the then Harrods Department Store owner, Mohamed Al-Fayed.

Her sons, William and Harry, were 15 and 12 respectively, at the time of the shocking incident and will not be marking the day together. The Duke of Cambridge will commemorate his mother privately, in the company of wife Kate, and their three children. They are currently in the process of moving into a new home at Adelaide Cottage, in Windsor. It is thought they may make a private visit to her grave on the 31st, but no official announcement has been made.

Meanwhile, Harry will be in Montecito, California with his close family. They are due to fly into the UK on September 5 for several charity events and will stay at Frogmore Cottage, which is just a short walk away from William and Kate’s new home, but it is not known if any plans have been made to meet up.

The relationship between the two men, who not so long ago were inseparable best friends, is severely strained following damaging revelations and comments made by Harry’s wife Meghan Markle, and himself, against the Royal Family. Five years ago both of the sons publicly grieved together when they opened a memorial garden at Kensington Palace to mark 20 years since her passing. At that time they paid their respects by laying floral tributes at the gates of her former home at Kensington Palace and made it clear that would be the last time that they made a public showing on the anniversary of her death.

They did put differences aside last year when they unveiled a statue of Diana on what would have been her 60th birthday, but it was clear there was a fracture, and it does not appear to have healed.

At a recent private charity dinner, Harry told guests that he planned to mourn the day in private. “Next week is the 25th anniversary of my mother’s death, and she most certainly will never be forgotten,” he said. “I want it to be a day filled with memories of her incredible work and love for the way she did it. I want it to be a day to share the spirit of my mum with my family, with my children, who I wish could have met her. Every day, I hope to do her proud.”

Every now and then an event occurs where people will be able to recall exactly where they were when they first learned of it. The announcement of the Princess of Wales’ death was very much one of those moments. It shook not just the UK, but the entire world. She was probably the most famous person on the planet at the time, so it stopped everyone in their tracks, right around the globe.

The crash happened when, after leaving the Ritz Hotel in Paris, they were driven away at speed by their driver Henri Paul, seeking to escape the attention of the paparazzi following on motorcycles. The black Mercedes-Benz W140 S-Class vehicle clipped another vehicle that it was passing on the entrance to the Pont de l’Alma underpass, opposite the Eiffel Tower, on the north bank of the River Seine. Mr Paul lost control and it collided head-on with a central pillar, obliterating the front of the vehicle.

The car had been travelling at approximately 65 mph, which was more than twice the speed limit for the tunnel’s approach. Neither Diana, nor her boyfriend Dodi Fayad, who died at the scene, had been wearing their seatbelts at the time. It has been said that had they been there was a good chance they would have survived. Diana was partially conscious immediately after the impact, but heartbreakingly died several hours later in hospital, from internal bleeding after massive chest and lung injuries, despite frantic efforts to save her on the operating table. Diana was pronounced dead at the hospital at 4am (3am BST), on 31 August 1997.

Witnesses to the crash said that photographers on motorcycles had “swarmed” the Mercedes “before it entered the tunnel”. Some of the photographers did try and assist the best they could, but others unbelievably took pictures, looking to cash in on their “prize catch”. In 2008, after a four year investigation, costing around £8.5million, against a backdrop of wild conspiracy theories, a jury decided that Diana had been unlawfully killed by the “grossly negligent driving of Henri Paul”, along with the following paparazzi vehicles, and the fact that the passengers were not wearing seatbelts.

In the week that followed there was an enormous outpouring of grief, especially in the UK, but also around the world.

The then Prime Minister, Tony Blair, called her “the people’s princess” in an emotional tribute several hours after her death was announced, he said: “I feel like everyone else in this country today. I am utterly devastated. Our thoughts and prayers are with Princess Diana’s family, particularly her two sons. Our heart goes out to them. We are today a nation in a state of shock, in mourning, in grief that is so deeply painful for us. She touched the lives of so many others in Britain and throughout the world with joy and with comfort. With just a look or a gesture that spoke so much more than words, she would reveal to all of us the depth of her compassion and her humanity.”

Before adding: “We know how difficult things were for her from time to time. But people everywhere, not just here in Britain, kept faith with Princess Diana. They liked her, they loved her, they regarded her as one of the people. She was the People’s Princess and that is how she will stay, how she will remain in our hearts and our memories forever.”

Leaders were quick to pay glowing tributes too. Bill Clinton, the US president of the time, was one of the first. He said: “Hillary and I knew Princess Diana and we were very fond of her. We are profoundly saddened by this tragic event.”

Nelson Mandela, then president of South Africa, spoke of his profound shock and sympathy at the death of Princess Diana, who, he said “captured the imagination of our people”.

Even the Russian president Boris Yeltsin said he was “deeply shocked by the news from Paris of the tragic loss of Princess Diana”. Such was her gift for touching the hearts of all she met.

The news coverage took up huge chunks of air-time, and a sea of bouquets and flowers carpeted the areas surrounding Kensington Palace, where vast crowds gathered to pay their respects.

The funeral took place on 6 September 1997 at Westminster Abbey, London. Two thousand people attended the ceremony. British TV audiences watching the service peaked at 32.1 million. Worldwide an estimated 2.5 billion people watched the event, making it one of the biggest televised events in history.

In the afternoon, the coffin was driven to Althorp House, Diana’s childhood home, in Northamptonshire for her final resting place. People lined the route and hurled flowers at the hearse, which was a highly unusual sight in the UK. The princess was buried discreetly on a small island in the middle of the lake in the grounds. The grave is not open to the public.

Her popularity never wanes although people are still making some tidy sums out of her past. Such is the esteem that Diana is still held in, a car driven by her back in the 1980’s has recently sold for over $850,000 at auction. There was apparently “fierce bidding” for the black Ford Escort RS Turbo before the sale closed. The UK buyer, whose name was not disclosed, paid a 12.5% buyer’s premium on top of the selling price, according to the classic car auction house.

Diana seemingly drove the Escort from 1985 to 1988. She was photographed with it outside boutique shops in Chelsea and restaurants in Kensington. She preferred to drive her own car, with a member of her security team in the passenger seat. The car had just under 25,000 miles on the clock and was quite rare, not just for obvious reasons, but also because it was in black, when that particular series of vehicle was typically manufactured in white. She had got it in black to be more discreet and had got Ford to add features for her security, such as a second rear-view mirror for the protection officer.

Sticking up for Henri Paul

Journalist and royal correspondent Michael Cole was the former PR director for Harrods. He spoke recently of his frustration at what seems to be another wave of conspiracy theories, pointing the finger at the drinking habits of Henri Paul, who he knew well. “It seems like everyone is revisiting the horrific event with a microscope. I knew him really well. Henri Paul drove me when I was on business in Paris. He was affable, conscientious, and had a sense of humour. The idea of Henri Paul being an out-of-control drunk and irresponsible does not seem to make sense to the people that knew him the closest.”

He added: “Two days before the crash, the professional driver had passed the rigorous medical for the renewal of his private pilot’s license, flying being his other passion since serving in the French Air Force. He had successfully completed two Mercedes Benz courses for VIP drivers, including one teaching defensive anti-hijack techniques. Neither Paul’s driving ability, nor general conduct had ever been questioned.”

Michael argued: “Mr Paul had drunk two glasses of Ricard, an aniseed-based liquor, diluted with water in the Ritz Bar during the five hours before the crash. Wrong and reprehensible maybe, but then the French tend to do things their way; but that certainly does not make him drunk.” He went on: “Paul was shown on Ritz CCTV footage parallel parking his Mini in front of the hotel, walking and talking normally with several people, running up and down stairs, tying his shoelace and holding conversations at close quarters with Dodi, who would have sacked him on the spot had Paul shown any sign of intoxication, shortly before leaving on that fateful last journey. In my dealings with him he was an exemplary employee and the continuous rumours are cruelty upon cruelty.”

The incident still splits opinion and in today’s social media frenzy, there are likely to be more come up over the coming days, as 25 years approaches. It was it seems a tragic accident, a split second loss of concentration and three lives taken, just like that. The royals may not publicly show their faces on the day, although there could still be an appearance by a representative. Nevertheless, it is inevitable that there will still be crowds of people who will gather outside Kensington Palace to lay flowers and pay their respects to the “people’s princess”.