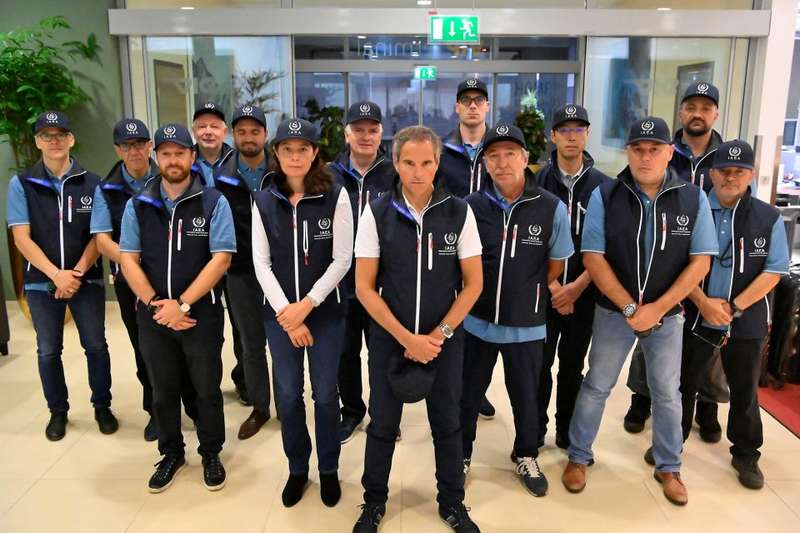 To avert a nuclear disaster, members of the International Atomic Energy Agency (IAEA) on Thursday entered the Zaporizhzhia nuclear power plant in Ukraine, which is the largest of such in Europe.

Last month, Russian forces took control of the nuclear power plant amid fears of a nuclear disaster. Presently, Ukrainians still control the plant, but it is no longer under the supervision of the Ukrainian government. Both sides have accused each other of shelling the plant, and there were fears that rockets could go the way of reactors and cause a calamity.

On arrival at the Zaporizhzhia nuclear plant, Rafael Grossi, the IAEA chief, said: “It’s a mission that seeks to prevent a nuclear accident and to preserve this important – the largest, the biggest – nuclear power plant in Europe.”

The tired-looking Rafael Grossi said they would spend a few days at the site but said the team had seen what they needed to see.

Mr. Rafael said he and his team would provide an impartial, technical assessment of what is happening at the plant and make further investigations before leaving the power plant.

He, however, said that several damages had been done to the plant, warning against further damages.

“It is obvious that the plant and the physical integrity of the plant have been violated, several times … This is something that cannot continue to happen,” he said.

“I think we were able in these few hours to put together a lot, a lot of information. The key things I needed to see I saw, and your explanations were very clear,” Rafael Grossi told Russian media.

The IAEA chief was in Ukraine with a 14-man team of experts whom he described as very experienced. He said: “I bring here the best and the brightest in safeguards, in safety, in security, and we will have a pretty good idea of what’s going on.”

In another video, Grossi said he and his team were staying at the nuclear power plant. He did not specify for how many days or other conditions of their continuous stay. He, however, confirmed that there could be an extension of their stay if there is a reason for it.

“We are not going anywhere. The IAEA is now there, it is at the plant, and it is not moving. It’s going to stay there,” Grossi said.

There would be no need for an IAEA visit if the plant is free of gunfires. The Ukrainian government has called on Russian forces to leave the largest nuclear plant in Europe as the visit will be fruitless if they remain there.

“If they (the IAEA) draw up a report about violations and give it to Ukraine to fix them, we won’t be able to do that as long as the Russian military is there,” German Galushchenk, Ukraine’s energy minister, said on Wednesday.

Despite calls to demilitarize the plant, the Russian government said its forces would remain there.  However, the occupiers had guaranteed the safety of the visitors and promised to ensure that the plant works safely.

“We are doing everything to ensure that this station is safe, that it functions safely, and for the mission there to carry out all its plans,” Russian foreign minister Sergei Lavrov said on Thursday.

The Red Cross also called for an end to the military operations around the Zaporizhzhia nuclear plant. The Director General of the ICRC warned that the consequences of any strike could be “catastrophic.”

“It is high time to stop playing with fire and instead take concrete measures to protect this facility and others like it from any military operations,” Robert Mardini told reporters in Kyiv.

“The slightest miscalculation could trigger devastations that we will regret for decades,” he added.

The route to the plant has experienced severe shellings in the past few days. Both the Russian and Ukrainian governments are accusing each other of being responsible.

According to the Governor of Zaporizhzhia Oblast, the Russian forces were deliberately shelling the route to the plant.

“The Russians are shelling the pre-agreed route of the IAEA mission from (the city of) Zaporizhzhia to the Zaporizhzhia nuclear power plant. The UN advance team cannot continue to move due to security reasons,” Starukh wrote on Telegram.

On the other hand, Russia accused Ukraine of using the visit as an opportunity to recapture its territories. It said 60 Ukrainian troops crossed the Dnipro river, which separates Zaporizhzhia and other regions.