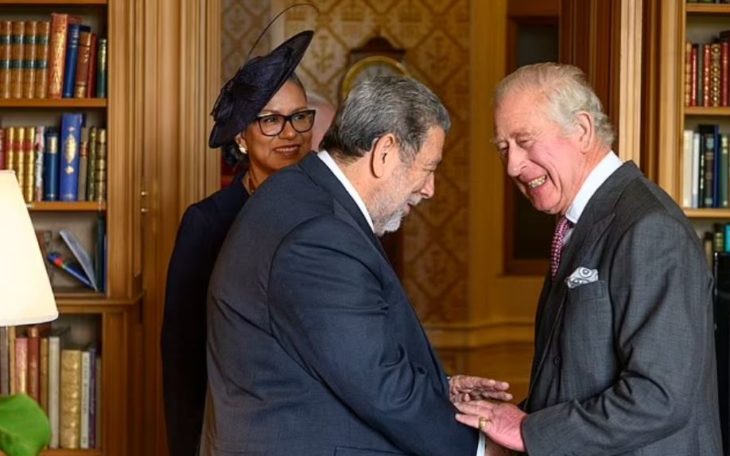 St Vincent and the Grenadines Prime Minister Dr. Ralph Gonsalves has been invited to have an audience with King Charles III at Balmoral, as the Caribbean leader considers removing the King as his country’s Head of State and appointing an executive President.

Gonsalves told St Vincent’s Parliament in July that removing the then Queen Elizabeth II as the country’s Head of State would be an opportunity to “complete the national democratic task” after gaining independence from the United Kingdom in 1979.

During a visit to St Vincent in April, Prince Edward and Sophie Wessex were met with protesters calling for reparations for British colonialism.

“End to Colonialism’, Reparation Now’, ‘Down with Neo-colonialism’ and ‘Compensation Now” were some of the signs and posters that the protesters displayed.

This will be Dr. Gonsalves’s second attempt at such a referendum in his 21 years in office, the first one being in 2009.

That one came short of the two-thirds majority needed to be passed, only receiving 43 percent of support.

It is believed that a second referendum would receive greater support from voters given similar trends in the region.

In November 2021, Barbados removed the Queen as its Head of State and replaced her with a President.

Several other Caribbean countries including Antigua and Barbuda and Jamaica have also expressed sentiments to move away from the control of the royals.

During a visit by the Earl and Countess of Wessex in April, Antigua and Barbuda’s Prime Minister Gaston Browne informed them of his country’s desire to sever ties with the UK and replace the Monarch with a President.

Following the death of Queen Elizabeth II on September 8, the Prime Minister reiterated his government’s intention to part ways, stating that a referendum would likely take place within a two-year time frame, should his administration be victorious at the impending general election.