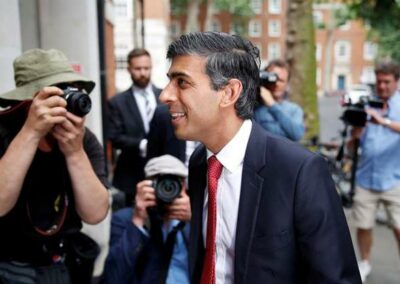 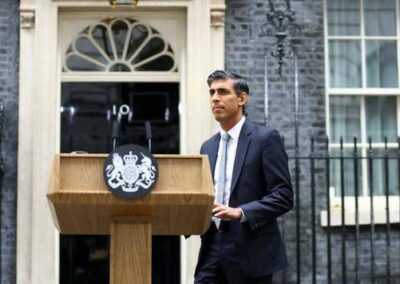 Rishi Sunak has officially become the prime minister of the UK after having an audience with King Charles III following Truss’ resignation. The 42-year-old entered Buckingham palace a few minutes after his predecessor had an audience with the King, which signals the end of her 50 days as head of the government.

The palace said it received Rishi Sunak, and the King gave his nod to the formation of a new government.

“The King received The Rt Hon Rishi Sunak MP at Buckingham Palace today,” the Palace wrote. “His Majesty asked him to form a new Administration. Mr. Sunak accepted His Majesty’s offer and was appointed Prime Minister and First Lord of the Treasury.”

Mr. Sunak soon departed for number 10, and nothing could better announce his arrival than his six minutes speech of hope and economic reform.

Like every other leader in the world that promises improvement in the living standard of citizens, Sunak vowed to fix Britain and heal the financial ailments of the country. While heaping praises on his predecessor, Liz Truss, the new prime minister acknowledged that the former leader made mistakes, but he was ready to fix them immediately. That is the message the British people would want to hear at a time when the pound is struggling not to reach parity with the US dollar.

While promising to turn the British economy around, Rishi Sunak said the changes will come with difficult decisions.

“This will mean difficult decisions to come,” he said. “I understand how difficult this moment is after the billions of pounds it cost us to combat Covid, after all the dislocation that caused, in the midst of a terrible war that must be seen successfully to its conclusions.”

The new prime minister acknowledged how difficult things are but insisted that he was up to the task of saving the dwindling economy and rebuilding the trust of the people.

“But when the opportunity to serve comes along, you cannot question the moment, only your willingness,” Sunak continued. “So I stand here before you, ready to lead our country into the future, to put your needs above politics, to reach out and build a government that represents the very best traditions of my party.”

“Together we can achieve incredible things,” he stated.

While more changes are expected in the new government, the appointment of Dominic Raab as Deputy Prime Minister has been confirmed. He will also serve as the Justice Secretary. Simon Hart was also appointed as the new chief whip, replacing Wendy Morton.

World leaders have been sending congratulatory messages to the new prime minister of the UK, with hopes that there will be positive relations between them and the newest prime minister.

No world leader would need the assistance of Rishi Sunak more than the president of Ukraine. Hence, president Zelensky was among the first to congratulate the new prime minister.

He tweeted: “Congratulations to Rishi Sunak on taking office as British Prime Minister! I wish you to successfully overcome all the challenges facing British society and the whole world today. I’m ready to continue strengthening the [UK and Ukraine] strategic partnership together.”

The prime minister of India, Narendra Modi, was also among the world leaders that congratulated Rishi Sunak.

He said: “Warmest congratulations Rishi Sunak As you become UK PM, I look forward to working closely together on global issues, and implementing Roadmap 2030.”

US President Joe Biden tweeted: “Congratulations to Rishi Sunak on becoming Prime Minister of the United Kingdom. Together, I look forward to enhancing our cooperation on issues critical to global security and prosperity, including continuing our strong support for Ukraine.”

President Macron of France also congratulated Sunak, saying they will work together to tackle the challenges facing Europe and the world.

“Congratulations to Rishi Sunak, who has become Prime Minister of the United Kingdom. Together we will continue working to tackle the challenges of the moment, including the war in Ukraine and its many consequences for Europe and the world. Macron tweeted.

“We hope that we can work with the UK side on the basis of mutual respect and win-win co-operation and advance China-UK relations along the right track,” Wang stated.

A congratulatory message that carries a question mark

Leader of the opposition Labour Party Keir Starmer has congratulated Rishi Sunak for making history as the first British Prime Minister of the UK. But his congratulatory message did not end without taking a swipe at the Tories.

“Congratulations, Rishi Sunak, on becoming Prime Minister and making history as the first British Asian PM,” he tweeted. “The Tories have crashed the economy, with low wages, high prices, and a cost of living crisis. The public needs a fresh start and a say on Britain’s future.”

However, if Sunak fails to rescue the UK economy from a total collapse, a general election might be inevitable.