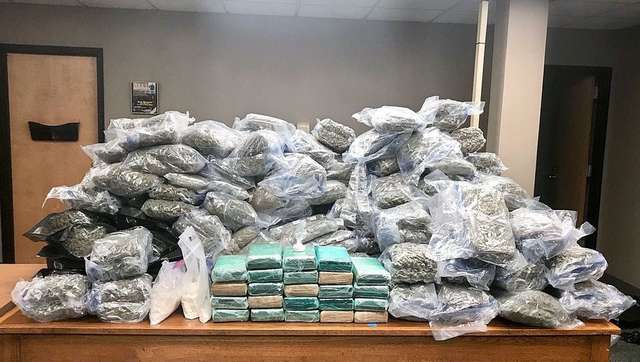 Five men are now in police custody following a massive drug bust in which US$26.4 million in suspected cocaine and approximately US$57,000 in suspected cannabis were found hidden on a cargo vessel on which they arrived in St Kitts and Nevis earlier this week.

Three nationals of Trinidad and Tobago and two nationals from Grenada and Carriacou are implicated in the crime.

The vessel is registered in Trinidad and Tobago and its last port of departure before arriving at the Port in Basseterre was St Vincent and the Grenadines.

During a search of the vessel, several bales of a white substance were found which are suspected to be cocaine.

In addition to that, the operation discovered a quantity of compressed vegetable material in transparent vacuum-sealed bags which are suspected to be Cannabis sativa which was concealed within the cabin walls of the vessel.

The five men along with the suspected narcotics were taken into Police custody and the individuals are said to be assisting the Narcotics Unit with the investigation.

An initial count of the bales revealed that 32 were found, with each consisting of 25-kilo blocks which amount to 800 kilograms of suspected cocaine while there was the suspected cannabis weighed a total of 12.852 pounds.

The police are continuing to probe that matter.