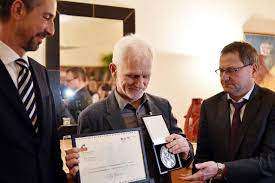 To bring an exciting end to a fascinating and enlightening week, the Nobel prize that probably carries the most international prestige – the Peace Prize, was awarded earlier by the Norwegian Nobel Committee for 2022, to one individual and two organisations, all activists for human rights.

The Peace Prize laureates represent civil society in their home countries. They have for many years promoted the right to criticise power and protect the fundamental rights of citizens. They have made an outstanding effort to document war crimes, human right abuses and the abuse of power. Together they demonstrate the significance of civil society for peace and democracy.

Ales Bialiatski, 60, was one of the pioneers of the democracy movement that emerged in the country during the 1980’s. He has devoted his life to promoting representation by the people and peaceful development, in his home country. Government officials have constantly tried to silence him, imprisoning him for a period between 2011 and 2014 on highly suspicious tax evasion charges.

Then after large-scale demonstrations against the oppressive regime in 2020, surrounding “rigged” elections, he was again arrested and detained, without trial and remains a prisoner of the state. Despite his terrible personal situation, Mr Bialiatski has not conceded any ground in his determination to fight for human rights and democracy in Belarus.

His wife spoke of being “overwhelmed with emotion”. Natallia Pinchuk said she wanted to express her deepest gratitude to the Nobel Committee and the international community for recognising her husband’s work.

Memorial were established in 1987 by human rights activists in the former Soviet Union who wanted to ensure that the victims of the communist regime’s persecution would never be disregarded. It is firmly based on the belief that confronting past crimes is critical in the prevention of new ones.

They have grown to became the most authoritative source of information on political prisoners in Russian detention facilities. As part of the government’s harassment of Memorial, the organisation was classed as a “foreign agent”, which led eventually to them being forcibly liquidated and the documentation centre was closed permanently.

Nevertheless, the group refused to go away. In a statement they said the award was a recognition of the group’s human rights work in the face of “unspeakable attacks and reprisals”.

The Center for Civil Liberties was founded by leaders of human rights organizations from nine post-Soviet countries, who decided to create a cross-border resource support centre in Kyiv, back in 2007, with a determination of advancing democracy in Ukraine. The center has taken a stand to develop the country into a state governed by rule of law.

They have monitored political persecutions in occupied Crimea, documented war crimes and crimes against humanity during the war in Donbas, and organised international campaigns to release the Kremlin’s political prisoners.

After Russia’s invasion in February 2022, they have engaged in efforts to identify and document Russian war crimes against the Ukrainian civilian population. In collaboration with international partners, the center is playing a pioneering role with a view to holding the guilty parties accountable for their crimes.

The decision to award the Nobel Peace Prize for 2022 to these three should be applauded the world over. The Committee acknowledged that they have recognised outstanding champions of human rights, democracy and peaceful co-existence. Their efforts to support true values, anti-militarism and principles of law, represent exactly what Alfred Nobel’s vision of peace and brotherhood between nations, was all about and is precisely what the world and specifically their region of the world, needs right now.

Message to Putin not behind award

The chairwoman and head of the committee, Berit Reiss-Andersen, was quizzed by reporters after her announcement as to whether this year’s peace prize recipients were intended to send a message to Russian President Vladimir Putin. She dismissed such a claim saying the prize was “not against anyone” and had been given for positive actions.

The last five winners of the Nobel Prize for Peace are:

2021: Maria Ressa and Dmitry Andreyevich Muratov for their efforts to safeguard freedom of expression.

2020: The World Food Programme (WFP) for its efforts to combat hunger and act as a driving force to prevent the use of hunger as a weapon of war and conflict.

2019: Abiy Ahmed Ali for his decisive initiative to resolve the border conflict with Eritrea.

2018: Denis Mukwege and Nadia Murad for their efforts to end the use of sexual violence as a weapon of war and armed conflict.

2017: The International Campaign to Abolish Nuclear Weapons (ICAN) for their work to draw

attention to the catastrophic humanitarian consequences of any use of nuclear weapons.

Earlier in the week four other Nobel Prizes were handed out to deserving recipients:

On Tuesday 4 October, Frenchman Alain Aspect, American John Clauser and Austrian Anton Zeilinger shared the award for Physics for their research into quantum mechanics, the science that describes nature at the smallest scales.

On Wednesday 5 October, the Chemistry award was also shared between three, with Barry Sharpless, Morten Meldal, and  Carolyn Bertozzi being recognised for their click chemistry in which molecular building blocks snap together quickly and efficiently, and reached a new dimension by utilising it in living organisms.

On Thursday 6 October, Annie Ernaux, 82, scooped the Literature Prize what was described as her courage and clinical acuity with which she uncovers the roots, estrangements and collective restraints of personal memory and her “uncompromising” 50-year body of work exploring “a life marked by great disparities regarding gender, language and class”.

They receive a Nobel diploma, each of which is a unique work of art, and a medal to go with their prizes, which will be formally presented at ceremonies on 10 December, which is the anniversary of the death of founder Alfred Nobel, in Stockholm and Oslo.

Winners are called laureates, to signify the laurel wreath given to victors of contests in ancient Greece. There was no cash prize back then, just honour, and whilst the money will no doubt be welcomed; for professionals who have dedicated their lives to their field of excellence, the recognition will definitely mean far more.