Antigua Airways to take off from Lagos, Nigeria on October 31 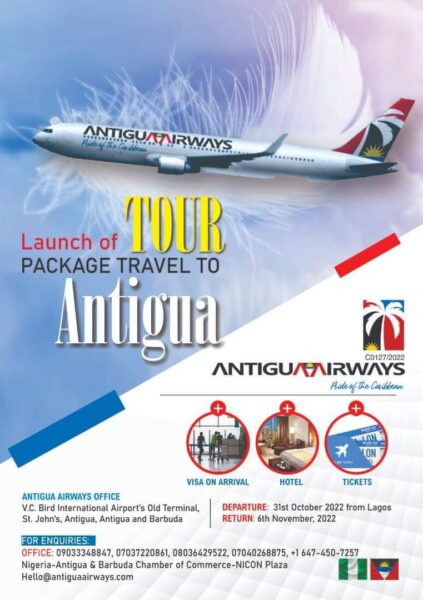 Antigua Airways could touch down at the VC Bird International Airport as early as the first week in October and Prime Minister Gaston Browne’s plans seem to be on track for what is expected to be a historic event.

Browne was the first to speak about the agreement with the airline back in June, telling the public that it will operate flights to Nigeria, Ghana, and Canada. The airlines he promised will be based in the twin island nation.

Other flights to countries in West Africa will be added as the airline grows, the prime minister had said. The government of Antigua and Barbuda is a part owner in the company and will enjoy 20 percent of the profits generated.

The aircraft, which have been secured under a wet lease arrangement, will offer amenities including a modernized interior with touchscreen in-flight entertainment and charging ports.

The launch of Antigua Airways is also expected to pump much-needed business into LIAT, as the hope is to establish timely connections for its passengers to other Caribbean islands via the V. C. Bird International Airport home base.