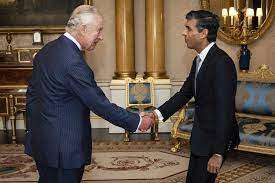 Shortly before lunchtime today (25 October), Rishi Sunak arrived back at Number Ten Downing Street from his fleeting trip to Buckingham Palace just around the corner, where just after Liz Truss had handed in her resignation to King Charles III, he was officially asked by the monarch to form a government, and become the UK’s 57th Prime Minister.

The audience with the King marked the symbolic handover of power, in a ritual of continuity, against a backdrop of huge political turmoil. He becomes the third PM in the space of just seven weeks. It is one of the key constitutional roles of the King, and one that his mother undertook, despite her failing health, only last month, when appointing Ms Truss, before sadly passing away just two days later.

Emerging from his chauffeur driven vehicle, through the gates at Downing Street, Mr Sunak took to the lectern to address the public in his first speech and gave a confident and determined statement of intent. He once again reiterated that this was a time of profound economic crisis, just as he had yesterday when winning the battle to become leader. He spoke of the problems still being felt in the aftermath of Covid and the ongoing war in Ukraine.

Paying tribute to his predecessor, he acknowledged Ms Truss’ aims were noble, but highlighted that she had made mistakes, before quickly emphasising that they were not born of ill-will, or made with bad intentions, indeed he felt they were quite the opposite; but there were mistakes all the same, and he believed he had been elected by the party to fix them, and declared that work starts immediately.

Promise to unite the country

He reminded people that when he was Chancellor he had done all he could during the pandemic to help individuals and businesses with schemes such as furlough, at an incredibly difficult time. He promised to unite the country, not with words but with actions, committing to work day in and day out to deliver. He spoke passionately when he said he was not prepared to leave debt to the next generations, simply because this government were too weak, whilst assuring everyone that he would bring integrity, professionalism, and accountability at every level. He accepted that trust needed to be earned and stated that it was his intention to earn the trust of the British public.

Pledge to honour the party’s mandate

He then turned his attention to Boris Johnson, firstly praising his achievements in office, before revealing how he treasures Mr Johnson’s warmth and generosity of spirit. He pledged to deliver on the conservative’s 2019 mandate and keep the promises made back then in the manifesto to build a stronger NHS, create better schools, and safer streets, control borders, protect the environment, and support the armed forces.

He tried to reassure the listening public that he understood the present difficulties that families were going through and appreciated all the hardships and sacrifices being made, but he was not daunted by his position in high-office and was determined to live up to its demands. He closed by insisting he was ready to lead the country into the future and put the nations needs above those of politics and stated that he wanted to fill tomorrow and every day there after, with hope.

He then entered his new home as the youngest head of government for two centuries and the very first British Asian PM. There had been some heckling heard outside of Downing Street throughout his speech and maybe somewhat ironically, the playing of “I Predict A Riot” by Kaiser Chiefs, on a speaker in the distance.

Understanding and defiance in PM’s tone

To be fair to Mr Sunak, he came across well in an impressive opening pitch, whilst still presenting an air of understanding of just how difficult the job will be. His tone was striking in that he obviously recognised the horrendous economic climate, but displayed his own particular brand of defiance, and was quite explicit that it is the party’s mandate to deliver, not as some had suggested, Boris Johnson’s.

Mr Johnson was quick to offer his congratulations, saying: “This is the moment for every Conservative to give our new PM their full and wholehearted support.” The Liberal Democrats also responded immediately after Mr Sunak had finished his speech, and predictably they were not so forthcoming with their pleasantries. Leader Ed Davey said the refusal to call a general election showed that the “Conservative Party does not trust the British people”. He added that he believed that the public would be furious that they have been denied a say, while Conservative MP’s get to decide who runs the country.

Earlier, Ms Truss had said in her farewell speech that it had been “a huge honour” to be PM and to lead the nation in mourning the death of Queen Elizabeth II and welcoming the accession of King Charles. She insisted that her government had acted “urgently and decisively” to help hard-working families and assist thousands of businesses to avoid bankruptcy. Strikingly, there was no apology for the chaos her brief leadership had caused.

Instead, she then seemed to go down a Boris Johnson route by quoting the Roman philosopher, Seneca: “It is not because things are difficult that we do not dare, it is because we do not dare that things are difficult.” All very profound, but largely falling on deaf ears. She concluded by stressing that the country must take advantage of the Brexit freedoms to do things differently, and restore power for democratic institutions. Lower taxes so people can keep more of the money they earn and achieve more job security, higher wages and “more opportunities for our children and grandchildren”, were her closing aspirations, before wishing her successor “every success”.