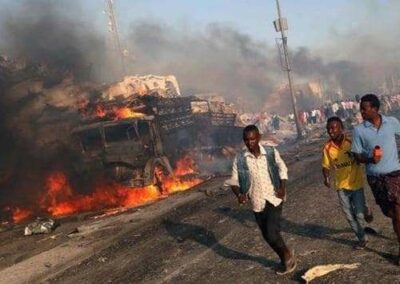 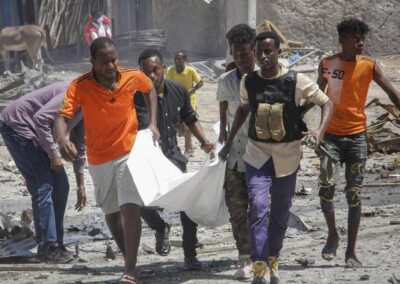 Disaster struck in Mogadishu on Sunday after two car bombs exploded at Somalia’s education ministry, killing at least 100. The death toll was on the high side because the explosions happened next to a busy market. President Hassan Sheikh Mohamud said 300 others sustained injuries and warned that the death toll could rise.

“We ask our international partners and Muslims around the world to send their medical doctors here since we can’t send all the victims outside the country for treatment,” President Mohamud said.

Somalia, with its poor medical facilities, might not be able to care for victims hence the government’s call for external help. The health care system in Somalia is one of the worse in Africa.

Abdirazak Hassan, who witnessed the first blast, said it struck the perimeter wall of the education ministry, where street vendors and money changers are located in the market.

“I couldn’t count the bodies on the ground due to the (number of) fatalities,” Hassan said.

Duwane Halima could not find her uncle after the second blast. “We don’t know whether he is dead or alive but the last time we communicated he was around here,” she said tearfully.

Like Halima, many residents are searching for their loved ones at the scene of the blast, while others have gone to hospitals to search for their relatives.

Al-Shabab, an extremist group, linked to Al-Qaeda, had claimed responsibility for the bomb blasts that claimed over 100 lives on Sunday.

The dreaded group described the ministry of education as an “enemy base” and accused the ministry of receiving support from non-Muslim countries. They said the continuous link with such countries could remove “Somali children from the Islamic faith.”

The ultimate goal of Al Shabaab is to overthrow the government and replace it with an all-Islamic government. The group could be another Taliban in the African country owing to its strong interpretations of Islamic law. In its effort to capture power, the group frequently attacks Mogadishu and other parts of the country. However, this is the first of many times they are claiming responsibility for an attack that killed dozens of civilians.

It appears that the group’s recent attack was not unconnected to Sunday’s meeting of top government officials and security personnel on how to clamp down on the terrorists. President Hassan said the government is winning the war against Al-Shabab.

United people at a trying time

Before help comes from another country, the people of Somalia, especially in Mogadishu, have united to do the little they can to save the hundreds of injured people still in the hospital. The youths in the country’s capital on Sunday mobilized a blood donation drive. They also ensured the delivery of cooked meals and clothes to the victims in the hospital.

The world is ready to assist

The United Nations, WHO, and the United States are among the few that have commented on Somalia’s attack.

The Director General of the WHO, Tedros Ghabreyesus wrote on Twitter: “Devastating news. Our thoughts are with the people in Somalia and we send our deepest condolences to the affected families. The WHO is ready to provide support to the government to treat the injured and provide trauma care to the victims.”

Jake Sullivan, the National Security Advisor of the United States, released a statement condemning Sunday’s attack. The statement described the terrorist attack on the ministry of education as “heinous.”

“The United States remains committed to supporting the Federal Government of Somalia in its fight to prevent such callous terrorist acts,” the statement read

President Biden sent US troops back to the African country after President Trump withdrew them during his time as president. Jake Sullivan said the US army has conducted a series of airstrikes targeting the terrorists.

“[The UN] strongly condemns these heinous attacks and reiterates that the United Nations stands in solidarity with Somalia against violent extremism,” Antonio Guterres said in a statement.