Update: Ward says he resigned to save his reputation 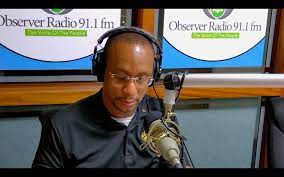 Another host at Observer Radio, Daren Matthew-Ward, has resigned. In a statement read out on-air at the end of Monday’s programme, he said that developments at the station had made it impossible for him to continue. He thanked the management and staff before playing King Short Shirt’s song “Our Pledge” as his last programme ended.

The longtime morning host and producer was popular with many listeners in Antigua and Barbuda. But he said he feared continuing in the role would “subject my reputation for fairness and balance to significant impairment” and that while he’d learned to “respect different opinions and different political stances” during his time as host he stated, “Such respect, I feel, is threatened by recent developments at Observer.”

Matthew-Ward has been under consistent attack on the airwaves at the same station. The nighttime host, Dane Knight, has many times derided Matthew-Ward, repeatedly suggesting that he was politically biased and too lenient toward the Antigua and Barbuda Labour Party (ABLP) government. Callers, texters, and guests who derided the morning host and producer were at times encouraged.

Knight has openly announced his support for the United Progressive Party (UPP) in the upcoming election. While he has stated before that he is not a member, he says he wishes to see the Labour administration of Gaston Browne out of office.

The former morning show producer and the host have also been increasingly under attack from other commentators aligned with the political opposition, who have persistently accused him of being an agent of the sitting administration. But he has never expressed support for a party, nor has ever refused any party the opportunity to appear on the morning show.

Political tensions have been heightened as the nation anticipates an election. As such, and as has happened in Antigua and Barbuda in the past, the tone and temper of media commentary have become more polarized and more partisan. Colloquially, the pre-election period t is often called the “silly season”.

On Monday morning, Matthew-Ward stated, “I seek the peace of mind and safety in this what is called the silly season. I cannot, therefore, continue to serve in this capacity under the prevailing circumstances.”

Matthew-Ward’s resignation comes on the heels of that of former The Big Issues host and producer Keiron Murdoch, who announced his resignation in a short statement on his personal Facebook page just over a week ago on Saturday night, October 23.

Murdoch offered no public explanation as to why he resigned, but a WhatsApp text message that he sent to guests for that Sunday’s The Big Issues show was later leaked. He told them that the station management had canceled an interview that had been booked with Prime Minister Gaston Browne for The Big Issues the following day.

Browne was to be questioned on the show regarding the major controversy surrounding his brazen cash handouts to residents in Pointe, which were caught on tape. Shortly after the interview was advertised on Observer’s Facebook page, the Managing Director of Observer, Algernon “Serpent” Watts announced on air that the Prime Minister would not be coming on. Watts is a candidate with the UPP.

Murdoch, in his message to guests, said that he “was unprepared to continue in the circumstances”. He has said nothing publicly since. There was a backlash, with many criticizing the partisan stance of Observer Radio in recent years and the impact on its once unchallenged programming.

Watts cleared the air on Monday, October 24, declaring that there was no bad blood between himself and the former The Big Issues host, but reaffirming his stance that the Prime Minister would not be hosted on Observer Radio. He said that no one would use Observer’s airwaves to help keep him as a UPP candidate out of the office. He added, “My door is open to more resignations.”

In March, Watts announced on-air that Labour Party spokesman, and the PM’s Chief of Staff Lionel “Max” Hurst, would no longer be entitled to a regular interview on the morning show on Mondays. This move garnered mixed reviews. Hurst was known to be misleading, deflective, and at times evasive in his interviews. He used rhetoric often. Many approved of the stance. But others also saw it as a political move.

In October, Watts announced on-air that Peter Wickham, a pollster regularly contracted by the Labour Party, would not be allowed on the station unless he had something “new” to say. The candidate and Managing Director said he took issue with Wickham’s criticisms of UPP leader, Harold Lovell.

Many have lamented the tone and direction of Observer’s programming in recent years. UPP candidate, Franz DeFreitas, has been a host on the Voice of the People show, Monday to Friday, 11:00 AM to 2:00 PM, for some time now. He often uses the program as a platform for the campaign. His co-host, Paul Quinn, has also expressed his support for the UPP. Like DeFreitas, Knight, and Watts, he too openly campaigns for the party on-air.

It is not unlike other stations in Antigua and Barbuda. The Labour Party-aligned Pointe-FM and the UPP-aligned Crusader Radio are examples of stations with clear partisan directorship. But many in Antigua and Barbuda had accustomed themselves to the Observer being a place where balance could be achieved, where no person or group was banned, and where the professional work of producers and journalists would not be hindered by political or corporate interests.