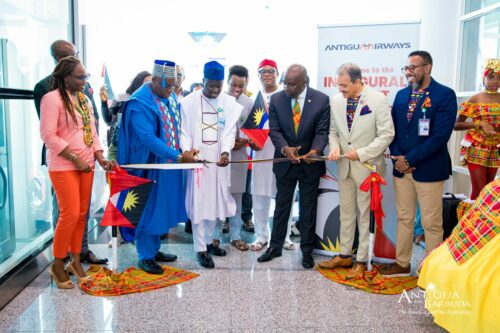 ​Over 100 passengers were on board an inaugural flight from West Africa that landed at the V.C Bird International Airport on Monday morning. The historic event coincides with the 41st Anniversary of the Independence of Antigua and Barbuda.

The flight signals the start of what is expected to be a “great” partnership between Antigua Airways and the government of Antigua and Barbuda.

Among those on the flight were the children of Marvelous Mike; Mercy and Marvelous Akinola. Mike, the Chief Executive Officer of Antigua Airways did not make Monday’s flight but officials say he will be on the island this Thursday. were however among the VIP personnel who arrived

The CEO of Euro Atlantic Airways Eugenio Fernandez, Emmanuel Samson Founding President of the Nigeria Antigua &amp; Barbuda Chamber of Commerce and MD of Antigua Airways Opeyemi Olorunfemi, were also on the flight.

Tourism Minister Charles Max Fernandez said the US and the UK have been the main source market in Antigua and Barbuda but Nigeria can easily become the number one, given the population.

“Again, this is the first charter but this is only the start and we will do whatever we can to ensure this continues. There are so many opportunities to be gained, not just in tourism but in culture, education, trade…which is so rich,” Fernandez said

He also suggested the addition of a news channel from Nigeria, so residents can better understand the culture.

“The vision is to connect with LIAT 2020 and that is so important for us. It would be a great opportunity to see the airlines working together,” Fernandez said.

“All this is critical as our tourism industry rebounds and we continue to see growth in our visitor arrivals again,” he said.

They both spoke on the importance of creating a greater bond with the people of Nigeria and by in large Africa due to both country’s history in the slave trade.

The firm is hoping to collaborate with LIAT, flying passengers north and south of Antigua who has come from West Africa on Antigua Airways.